Trent Valley Archives has in co-operation with YourTV and others produced a souvenir booklet which is intended to accompany the YourTV broadcast of “Spanning 100 Years: Building the Ashburnham Bridge”. Both the show and the booklet tell the remarkable story of building Peterborough’s Hunter Street Bridge. It was the most expensive municipal project to that date, and was built from 1919 to 1921 with a committed crew of workers, working for the Russell-Townsend Company. The plans were developed by Frank Barber, Ontario’s experienced bridge building engineer, and Claude Bragdon, a fascinating architect who managed the designs for what was Canada’s outstanding concrete bridge when constructed and has remained for a century as a picturesque and functional landmark. The bridge was almost officially opened on the Civic Holiday Monday in 1921, and so the show will premier on the Civic Holiday Monday in 2021, 2 August, 7 pm.

You can pick up a copy of the book at Trent Valley Archives on Wednesday 28 July, 10 am to noon, or by contacting Elwood Jones. This is a limited edition, and complimentary copies will be distributed on a first come first served basis. 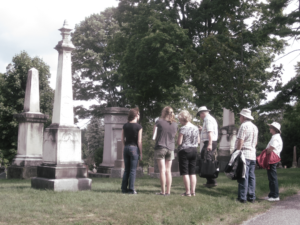