Papers of Howard T. Pammett (1909-1990), civil servant with the federal Department of Labor and local historian, consisting of correspondence with many people including Margaret Hennessy, 1984; C.K. Bottom, 1968-71; Peter McGillen, 1928-73; Eugene Forsey, 1969; Peterborough Examiner, 1945-53, chiefly with Robertson Davies; research notes and thesis while a student at Queen’s University, 1930-1935; some papers related to his travel and work with the Department of Labour, 1941-69; poetry and other literary works by Pammett; together with correspondence and research materials related to the local history of Peterborough, the Trent Canal, Irish emigration, the Grand Trunk Railway, the Peterborough Exhibition, Peterborough Collegiate and Vocational School, Ontario agriculture and the Kawarthas.

Available on site. The personal library of some 10,000 titles particularly rich in Canadian history and British and American fiction has been listed and is available on computer.

The papers were created by Howard T. Pammett and donated to the Trent Valley Archives with his large and important historical library through his son Professor Jon K. Pammett in 1990. In 2003, the archives received five maps that formerly belonged to Howard Pammett, and these are in Fonds 56. The Peterborough Centennial Museum and Archives has Pammett papers.

Howard T. Pammett (1909-1993) was born in Young’s Point, raised in Ashburnham, and educated at Peterborough schools, Peterborough Normal School, and Queen’s University. His seminal MA thesis on the Peter Robinson settlers, from the Assisted Emigration of 1825, is being prepared for publication and has been serialized in the Heritage Gazette of the Trent Valley since May 2000. He taught in the 1930s, and worked for the federal Department of Labour from 1941 to 1970. His major publication projects were the newspaper series, “The Progress of Peterborough,” Peterborough Examiner, 1950-51; Through the Years in Douro (1967); Lilies and Shamrocks: A History of the Township of Emily in the County of Peterborough (1973). 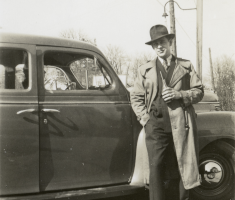