Peter Robinson, lead this exodus from Ireland. Born in New Brunswick in 1785, he was the eldest son of Christopher Robinson. During the War of 1812 he fought for the British, raising a rifle company and engaging the Americans at Sandwich. At the capture of Detroit, in August of 1812 Robinson is mentioned in General Brock’s Orders and in the following year he participated in the British defense of Michillimackinac. He succeeded in breaking through the American naval blockade of August, 1814. Playing an active role in politics, along with his brother Sir John Beverly Robinson, a member of Upper Canada’s famous Family Compact, Peter Robinson served in the Seventh Parliament of 1817-1820 and again in the Eighth Parliament of 1821-1824. During these years he served as the representative for York and Simcoe Counties, living for a time in Newmarket.

Following his two terms in Upper Canada’s Assembly, he became a member of both the Executive and the Legislative Council. Among his many other posts were: Commissioner of Crown Lands, Surveyor-General of Woods, Clergy Reserve Commissioner and one of three members of Sir Francis Bond Head’s Executive Council until his resignation in 1836. In the year 1823 Robinson was approached, through his brother, who was then Attorney General for Upper Canada, to lead an emigration from poverty stricken Ireland to Canada. Bringing over 182 families in that same year, Robinson opened and settled much of the Ottawa Valley.

He seemed the logical choice then, when Under Secretary of Colonial Affairs for Britain, Wilmot Horton, was searching once again to alleviate the Irish problem in 1825. In May of that year, the settlers Robinson had chosen in his new capacity as Superintendent, were gathered at the docks in Cork, carrying what possessions they could and in a great state of excitement. Nine ships awaited them for the Atlantic voyage.

When measuring the level of emigration it can be difficult, if not impossible, to say with certainty exactly how many people left Ireland during the nineteenth century. No record was taken of those leaving the country. One way to calculate the number of people who left Ireland over the course of the nineteenth century is to start with the number of population in 1801, add the expected growth rate (arrived at by subtracting the number of deaths from the number of births in a year) and any difference between the actual amount in 1901 and what was calculated, is the amount of emigration.

It has been estimated that at the start of the nineteenth century, Ireland had a population of 5.4 million. This swelled to 8.2 million in 1841 – based on a census taken four years before the Famine. In 1851, the number of people recorded as living in Ireland was 6.6 million – in other words, almost two million people had either died or emigrated. Fifty years later, Ireland’s population was still showing a decline (down to 4.5 million) even though every other European country was showing a population increase. These figures tend to suggest that approximately 8 million people left Ireland between 1801 and 1900.

So how do we know how many went to Canada and the United States? Most ‘guestimates’ have been taken from the American and Canadian censuses, which recorded the number of people of Irish birth living there at that time. This is not a very reliable indicator, however, as some Irish people may have been there either on business or on holiday. Others, who originally intended to settle overseas, may have returned to Ireland at a later date. Those who died before being recorded in the census, those who died en route, or those who left Ireland, intending to go to the North Americas but who only got as far as England or Scotland do not appear in these statistics. Passenger lists, which were compiled at the port of entry, not the port of departure, take no account of those who entered at a Canadian port with the intention of going on to America (or, less likely, vice versa). 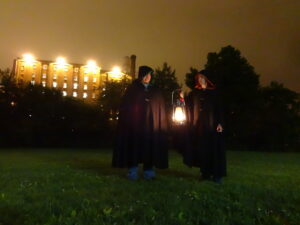 Tickets Available Monday October 11 This East City tour, will bring alive the dark side of Ashburnham. Friendly and knowledgeable guides will lead you by lantern light through the streets, expertly weaving together the ghosts[...]